5 best browser for online gaming, you would already know

There is nothing we can refer to as the permanent “best gaming browser for Desktop PCs or laptops” because today it would be one, and tomorrow something else will be. It’s all matter of time and technology enhancements. However, when it comes to using a modern browser for playing games online, most of us either using Google Chrome or Mozilla Firefox, but there is one more which one should now look at i.e Opera’s dedicated GX one. We will talk about that in this article.

Why we need the best browser for online gaming? Obviously, we don’t want glitches and latency issues or the one which binge’s on our system’s Memory.

So, whether you are in gaming and a productive task you would already know, what are the most common browsers to use. I am here just simply listing them in case, some of us still searching for the best browser for MMO gaming and internet surfing.

The answer to this question- What browser one should use for online games, I would suggest  Opera GX. However, if you don’t want a dedicated gaming section and options to limit the consumption of Memory and CPU, then others can be considered as well, given in this list.

Opera GX developed by the Opera Software developer team which is one of the oldest browser application providers. The first Opera browser was launched in 1995 and also a pioneer in providing a tabbed browsing interface.  And in the year 2019, they understand the demand for a dedicated browser for gamers, thus the team came up with Opera GX.

The interface of Opera GX is quite trendy with the default black and Red color neon look, suits to one who is in gaming and all. It is quite clean with minimum distraction elements, which is good for gamers while concentrating on their gameplay.

It comes with an inbuilt VPN and Adblocker to block unwanted ads which are quite common on various online gaming websites. 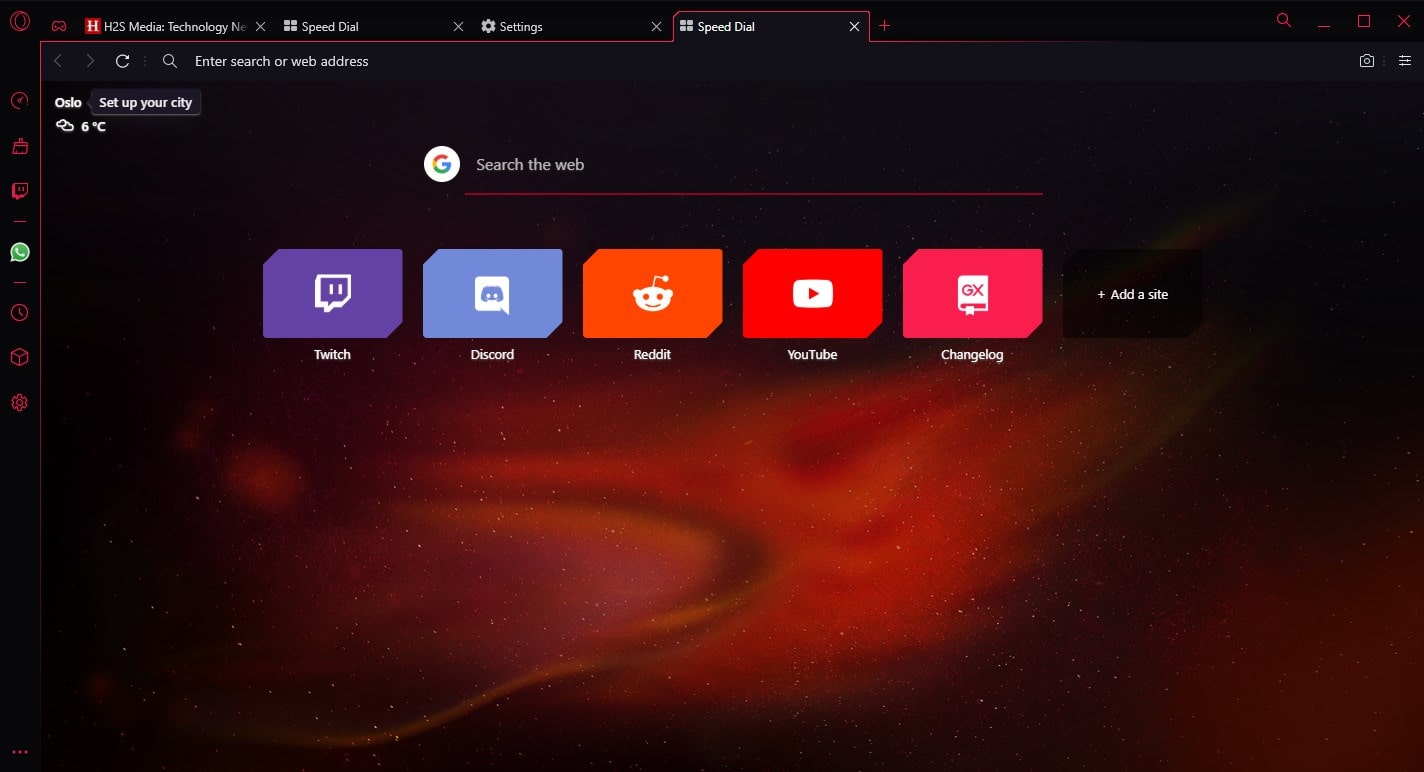 With the GX corner, the user cannot only explore free or paid games to download and play on a compatible operating system but will also get to know which new game is about to release and when, with the help of Release Calendar. 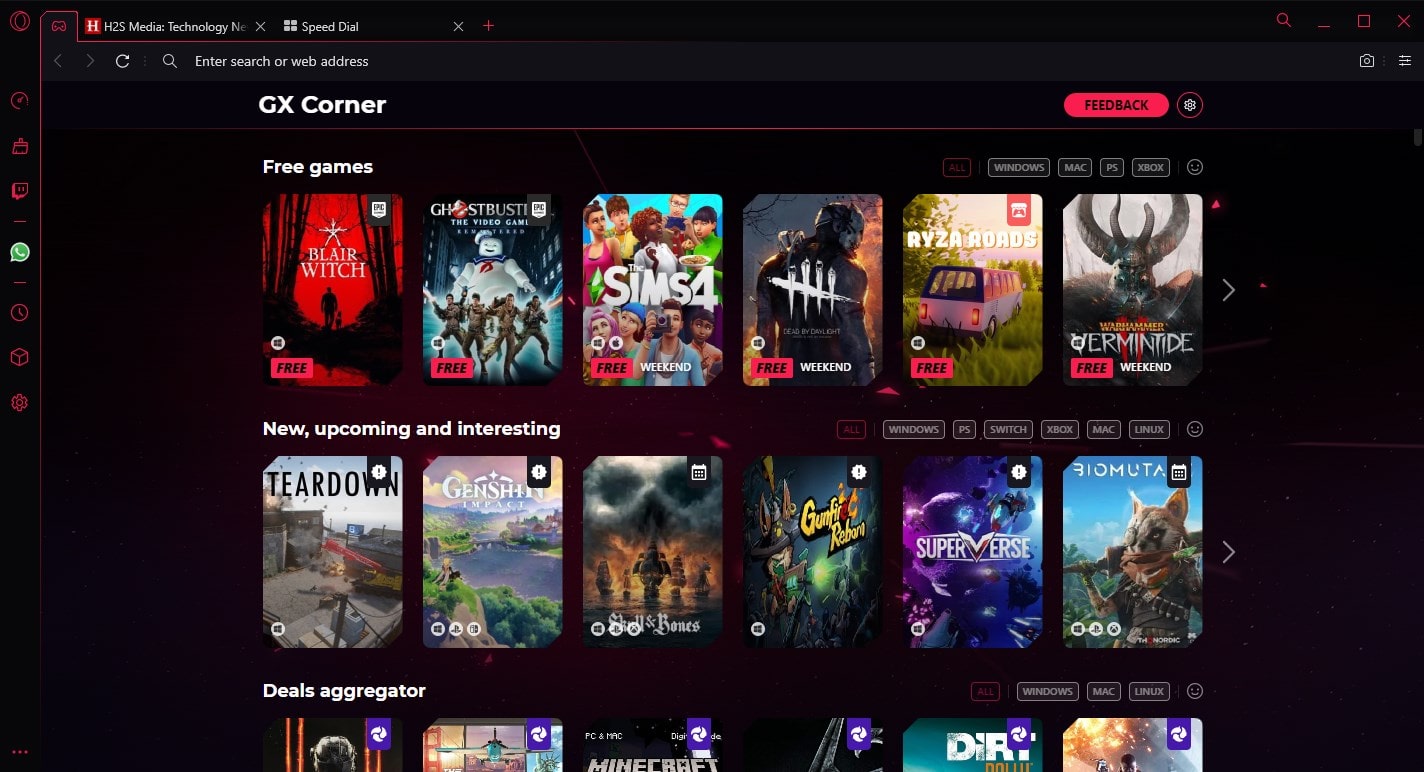 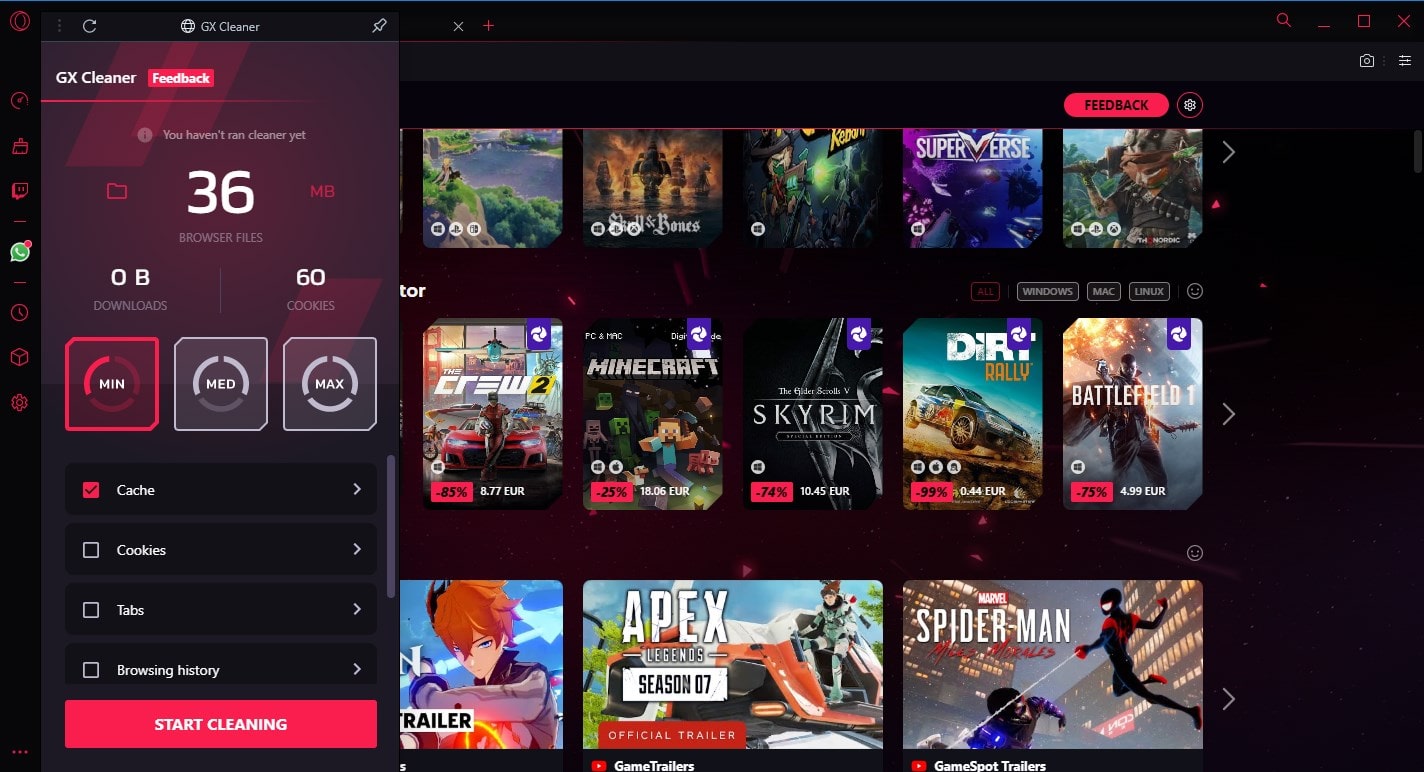 The “Hot Tabs Killer” can be used to limit the browser from consuming extra Memory and CPU. Yes, we can use a fixed amount of RAM and the Opera GX will only consume that. Even further we can restrict the upload and download speeds. 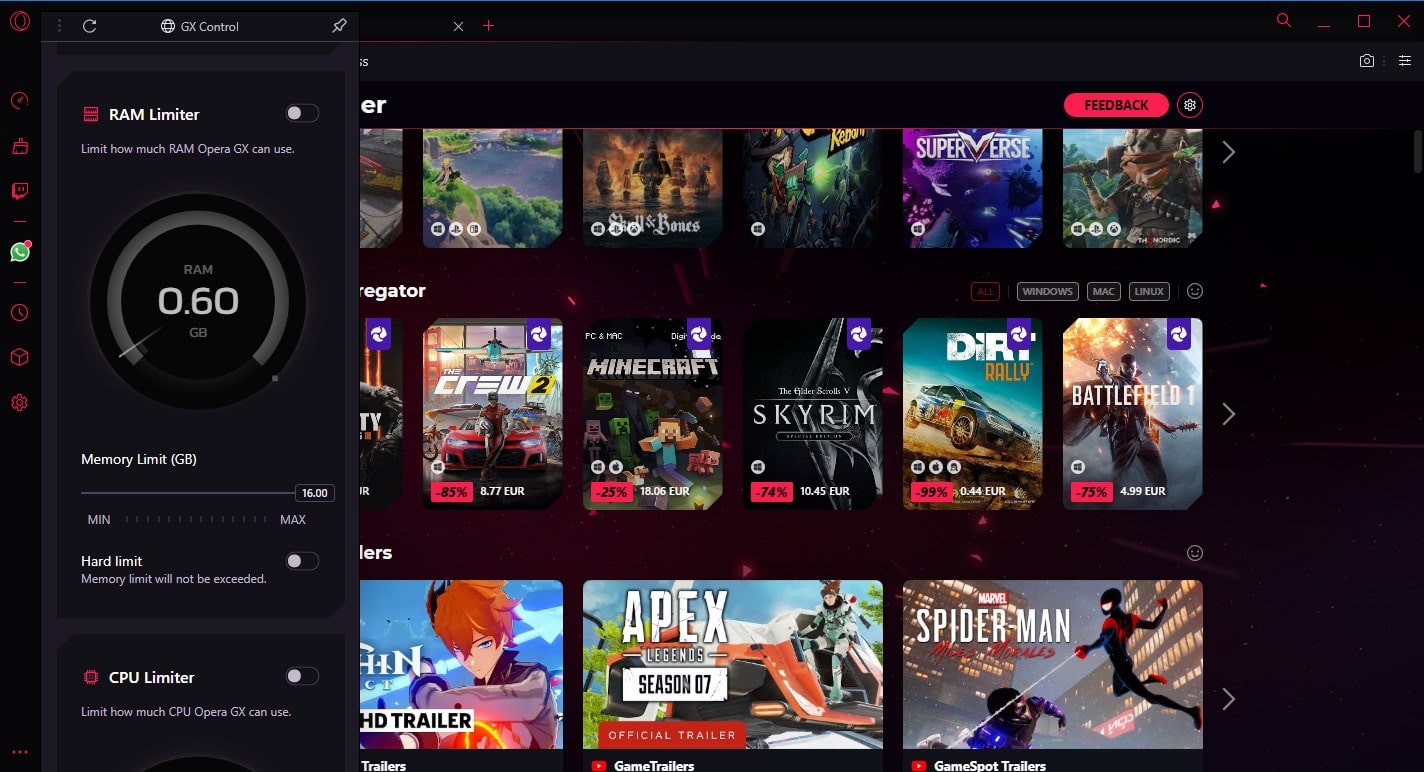 In addition, the developers have added standard messenger sidebar integrations for Twitch and Whatsapp. 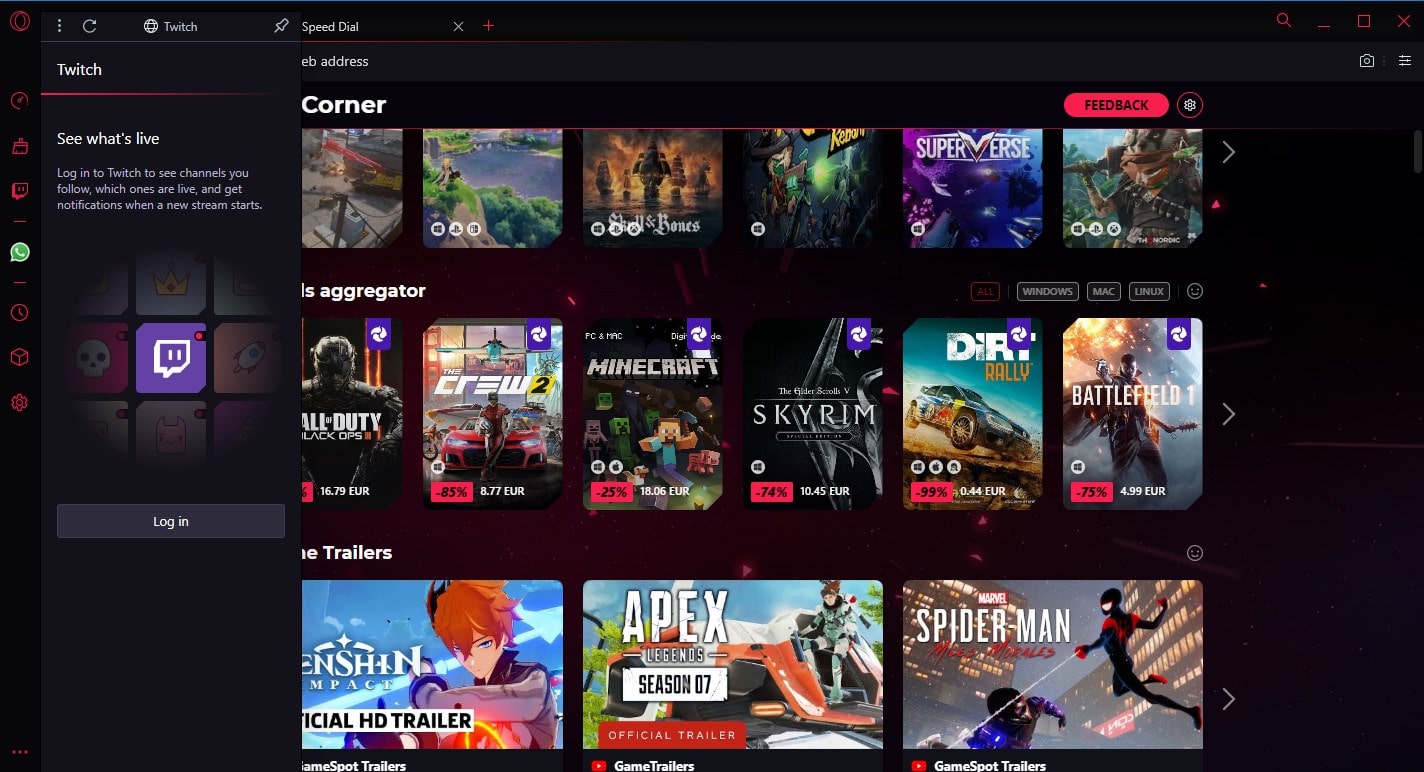 The advanced interface customization of the Opera GX gives users an ability to select between pr-define neon colors for the browser interface. By default, it will be red, apart from that blue, green, and more are there as well.

So, if you are a gamer and looking for a gaming browser then you should give it a try.

Vivaldi is another browser that is gaining a lot of attention now because of its no tracking and other interface-related features that make the browsing experience of user smooth. For example, just like Opera GX, it also comes with a left sidebar panel that gives access to various things such as Downloads, bookmarks, pinned websites by the users such as Instagram, Wikipedia, or any gaming website for a quick view.

Another feature that intrigued me personally is the ability of the browser to tab stacking, tab tiling, and vertical tabs. Means on the same tab we can surf two webpages simultaneously which is great not only for standard users but also those are in website development.

Few other features of it are the Notes manager, Dark or light mode, Pop-out video, Full-page screenshot capture, Post on Instagram from your computer, Mouse Gestures, and more…

The best thing we can Chrome extensions with it.

The brave browser is Chromium-based and very much popular for its security features. Although it is not like Opera GX, yet those want to shift from Google Chrome they can think about it. Because it is based on an open-source Chromium project, it can support the extensions and apps available on Chrome Store, which gives a gamer or standard users wide access to various productive and popular extensions.

It has inbuilt tracking protection (activated by default) and lets the user anonymously surf the internet using the Tor network. Thus, the people who are more worry about their privacy, they can rely on the Brave browser. However, this protection from the tracking of the Brave browser is similar to Firefox and the new Microsoft Edge, but to take it one step further the browser also uses its own implementation called Brave Shields.

This technology makes sure, the browser could efficiently block advertising, of course, the user can whitelist some particular web page. Third-party cookies are also blocked by default and DuckDuckGo is set as the search engine. 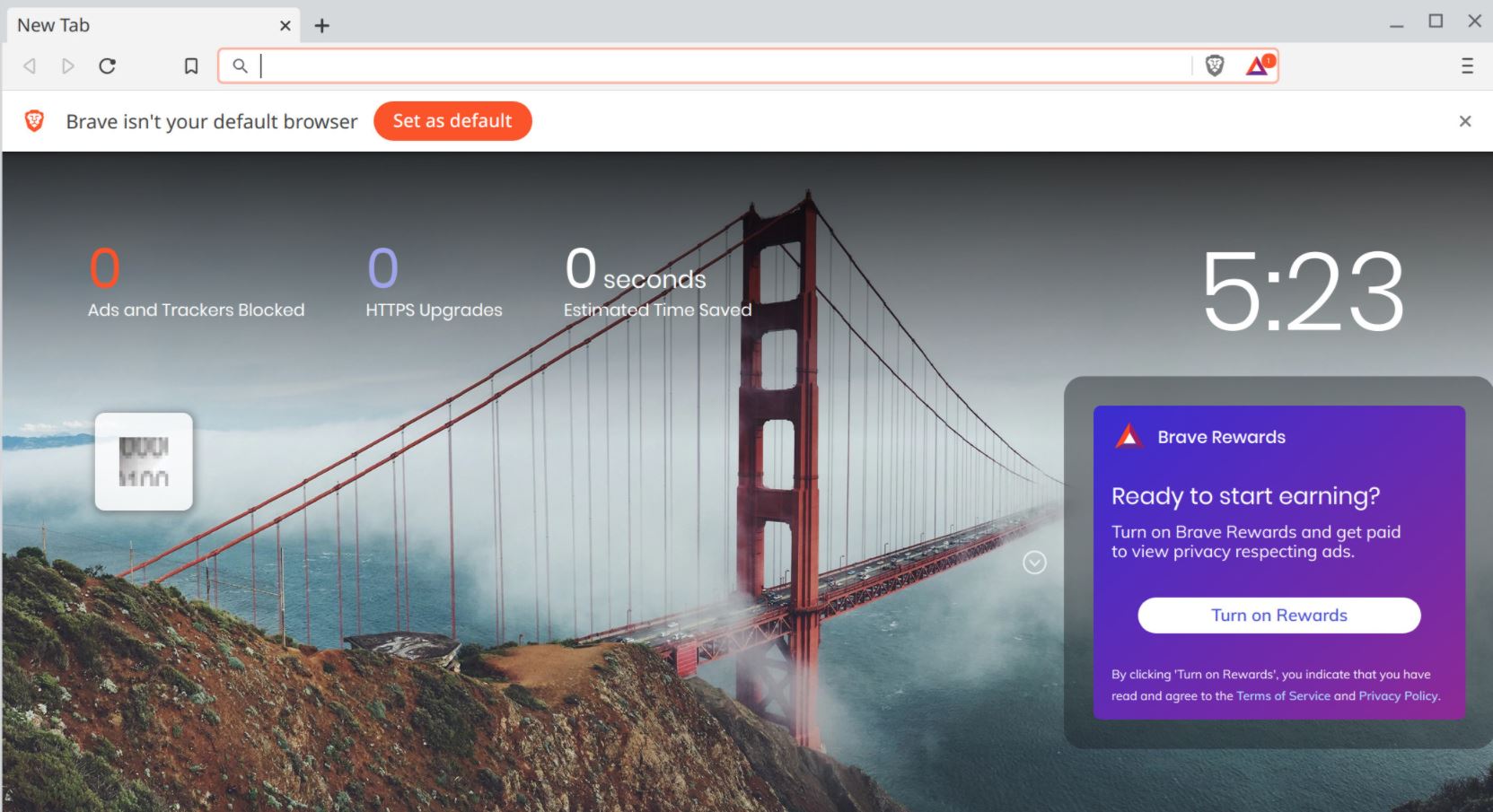 Can we use Brave on Android smartphones?

Yes, the Android version of Brave is available and can be installed directly via Google Play Store.

What about Linux and macOS, is Brave Browser available for them?

Brave Browser supports both Linux and macOS platforms and the corresponding versions are available to download on the official website.

Is there a portable version of Brave Browser for the USB stick?

Brave Portable is available, but not directly from the manufacturer, but via the Portapps platform.

How do I use Tor in the Brave Browser?

What are the disadvantages of using the Brave Browser?

There are no direct disadvantages in using Brave, however, some criticism is always there from the businesses. Mainly because of tracking and ad blockers used by default on it which decreased the revenue of the websites that are offering the content free of cost. Well, there is a program called “Brave Rewards” to compensate website providers but as per the publishers, that doesn’t work really well.

Firefox is an open-source project that has improved many technical things so far. Almost all Linux platforms will have it as their default browser. Just like Google Chrome, Mozilla doesn’t deprive of browser extensions to increase the standard range of functions as required.

The reinvented Firefox Quantum version of the browser has improved itself but still, there is some room to do more. However, people claim that it consumes less memory than Google Chrome, but it is a myth at least in my test there was not much difference between Chrome and Mozilla Firefox in terms of RAM consumption while using them on Windows 10. Even Chrome consumes less memory. Thus, choosing Mozilla over just RAM consumption is not a point. However, there are other factors shipped with it such as tracking protection, blocks scripts from social networks that track users, as well as tracking cookies, crypto miners, and fingerprinting techniques. It also now offering free cloud transfer of data just like WeTransfer. 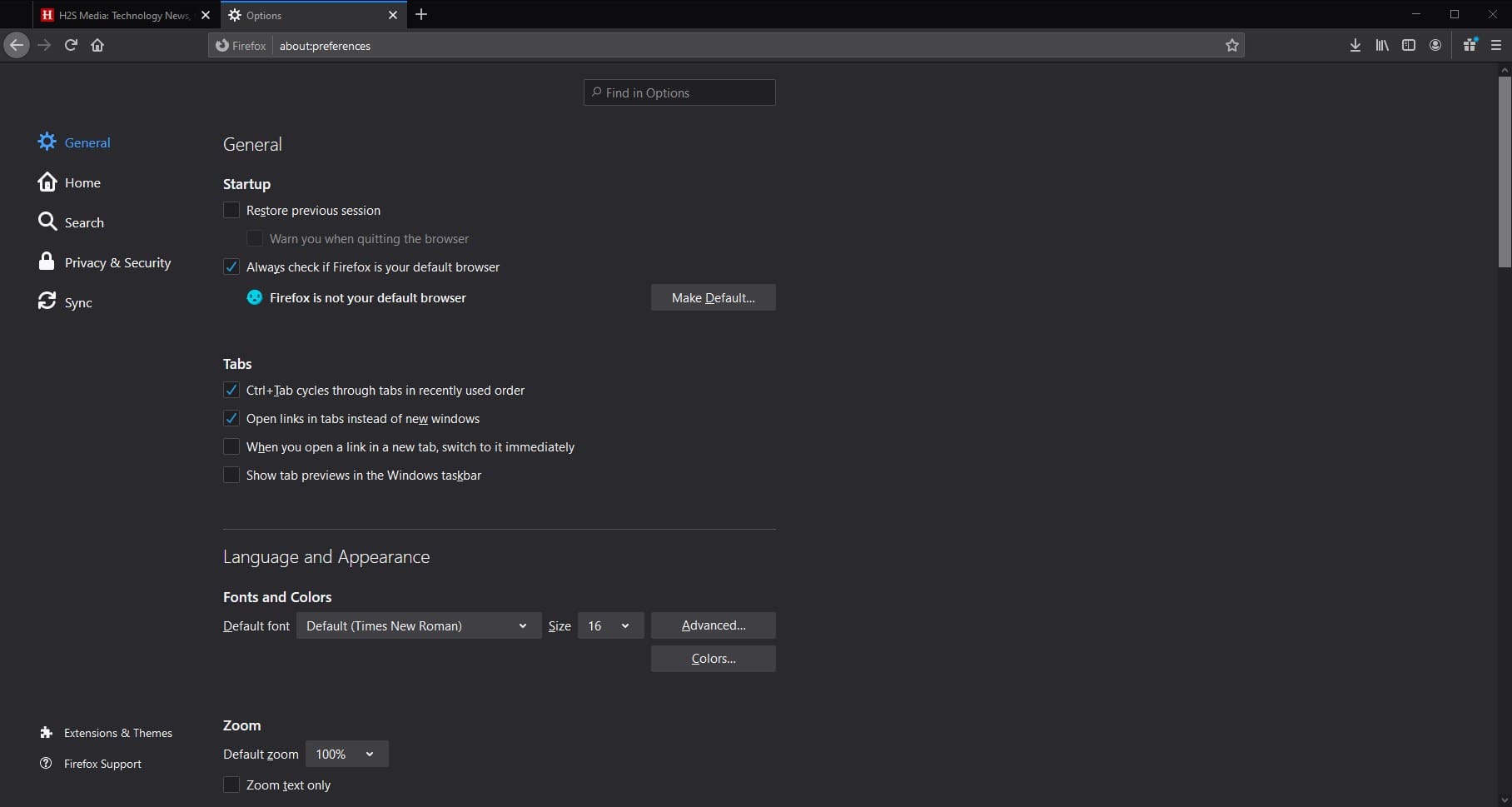 Is Chrome better than Firefox?

Yes, in terms of memory consumption and features, Chrome is better than Mozilla Firefox. It is my personal experience after using both of them. However, if you worry about privacy then you should consider Firefox.

When it comes to privacy and safety, Firefox is better than Chrome. And absolutely Firefox is safe for performing day to day browsing. If you are doing something which is not good in the eyes of law then you should consider the Tor browser and its network.

If you are on a Linux operating system, Firefox already would be there. However, Windows and macOS users can visit the official website of Mozilla to download a copy of Firefox Quantum.

I don’t think I have to tell you about Google’s Chrome that most of us have used at some point in time or perhaps still using. It is based on the Chromium browser which is further the base of dozens of other browsers. Well, in terms of performance Chrome is quite good. Even opening multiple tabs would not be a problem at all. It comes with an Inbuilt malware scanner, password manager, and Adblocker, however, the Adblocker is not much aggressive as in the other few browsers mentioned above but enough to stop intrusive advertisements. After all, the ads are not only the income source of Google but also for other websites and blogs as well. 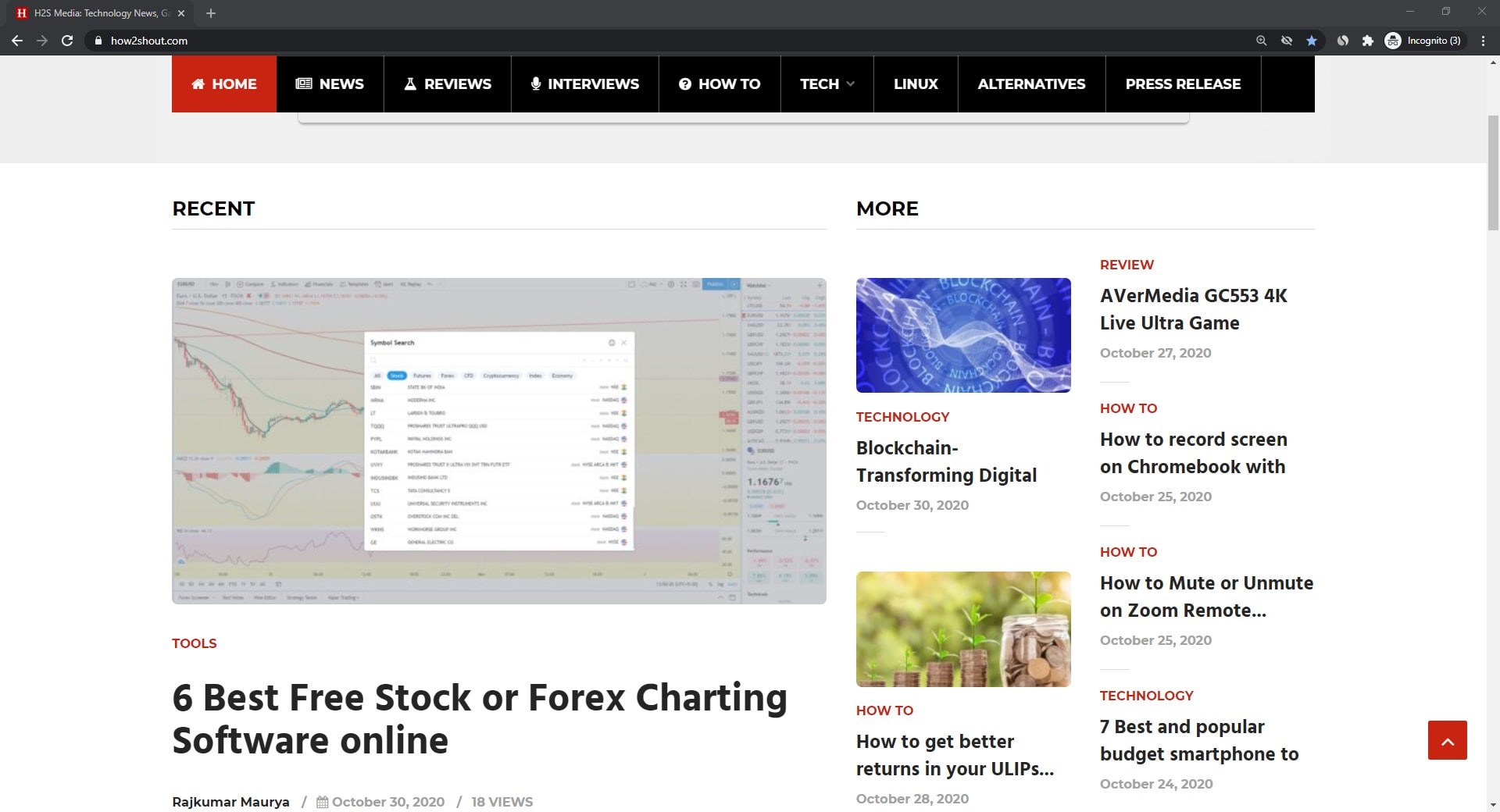 I know most of you already know about all these browsers, however, if you don’t and looking for the best gaming browser then start with Opera GX, it will not let you down. After that Vivaldi would be a nice option because of quick tools that one would need while gaming such as the multi-tabs view in a single tab and quick access bar. Whereas after them if you just want a browser for privacy then Brave and Mozilla. Whereas Google Chrome is always here and you might be using it already.

If you prefer any of the browsers for games listed here or you already using one which is not on the list, then let our readers know why?

Toronto gamers mourn the loss of an important community space