Here are five thoughts from this week’s Dallas-area football games, and what it all means as we look ahead.

Highland Park has played only three games this season. It looks ready for next week’s highly anticipated showdown with Longview.

Hawaii pledge Brayden Schager was 19 of 22 passing for 255 yards, and he ran for two touchdowns, to lead Highland Park to a 41-21 win over Sherman on Friday. Anthony Ghobriel also had two touchdown runs for Highland Park (3-0, 1-0).

Next Friday’s game at Longview will be a matchup of two teams that both won state titles in 2018 — Longview in Class 6A Division II and Highland Park in 5A Division I. Longview (5-1, 2-0) routed Wylie East 52-17 on Friday and has won five in a row since a season-opening loss to Temple.

Ewers was the focus of stories by ESPN, Sports Illustrated, The Athletic and every national recruiting service, as experts examined which colleges become the front-runners to land Ewers and whether UT coach Tom Herman’s job is now in jeopardy. That scrutiny wasn’t surprising, given that Ewers is the top-rated quarterback in the nation in the Class of 2022.

Ewers didn’t let that district him. He went out Friday and threw for 300 yards and four touchdowns in a 42-10 win over Keller. He has thrown for 15 touchdowns in four games for Carroll (3-1, 2-0 District 4-6A), ranked No. 22 in the state in 6A by Dave Campbell’s Texas Football.

District 11-6A was expected to be a three-team race between Duncanville, DeSoto and Cedar Hill, which are all currently ranked in the top 10 in the state in Class 6A. That is still the case, but not before Duncanville and Cedar Hill were thoroughly tested for one half each on Friday.

It just showed that no team can be taken lightly in the “District of Doom.”

Duncanville (3-1, 2-0), ranked No. 5 in the nation by USA Today, led Mansfield just 7-0 at halftime before pulling away for a 35-0 win as Grayson James passed for 280 yards and three touchdowns. In the first half, Mansfield ran 12 more offensive plays, and Duncanville had only an 8-yard advantage in total yards.

Cedar Hill (4-0, 2-0), ranked No. 10 in the state in 6A, led Waxahachie 14-10 at halftime as four-star Tennessee pledge Kaidon Salter was held to 41 yards passing in the first half. But Salter ended up accounting for three touchdowns (two rushing) and 252 yards of total offense as Cedar Hill won 35-10.

Next Friday, DeSoto — ranked No. 10 in the nation — will play at Cedar Hill at 7:30 p.m. to determine the winner of their four-team zone. The week after that, the DeSoto-Cedar Hill winner would play its zone championship game against Duncanville — if Duncanville beats Waco Midway next week to win its zone.

Midlothian Heritage took a huge step toward winning the District 5-4A Division I title, beating Stephenville 42-27 as Latray Miller ran for 178 yards and three touchdowns.

Heritage (8-2, 4-0) can win the district title by beating Brownwood in its regular-season finale Nov. 7. Or Midlothian Heritage could have the district’s top seed wrapped up before it plays that game.

If Waco La Vega beats Brownwood (4-4, 2-1) in a makeup game Monday, that will leave La Vega (6-2, 3-1) as the only team in the district with one loss. Heritage would clinch the No. 1 seed because it beat La Vega 31-21 on Oct. 23 and would own the head-to-head tiebreaker if they finished tied for first.

Wilmer-Hutchins took control of District 8-4A Division I by beating Lincoln 44-36. Both teams have clinched playoff spots, but Wilmer-Hutchins now owns the critical head-to-head tiebreaker.

Lincoln could still finish 4-1 in district if it beats North Dallas next week, but if Wilmer-Hutchins also finishes 4-1, Lincoln would lose the head-to-head tiebreaker that would determine the top seed. Lincoln has clinched a playoff berth because the worst it can finish in district is 3-2, and Pinkston already has three district losses and Roosevelt is assured of at least three district losses because it will get a loss for its canceled game against Wilmer-Hutchins.

Subscribe now and get 1 month free with the code: GREGR 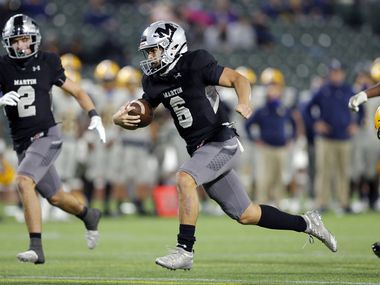 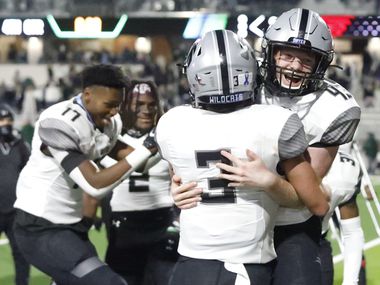 To view subscription options for The News and SportsDay, click here.

How to choose an electric car (spoiler: it will probably be a Tesla)