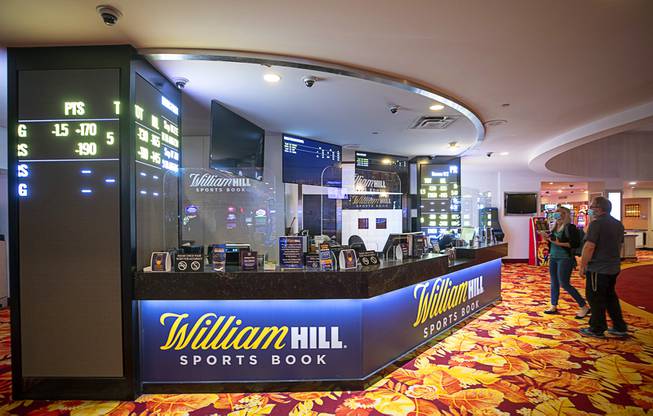 A view of the William Hill Sports Book during the reopening of the Tropicana Las Vegas Thursday, Sept. 17, 2020.

ATLANTIC CITY, N.J. — Caesars Entertainment said Wednesday it is buying the British bookmaker William Hill for $3.7 billion in a deal aimed at binding its casinos ever closer to the fast-growing legal sports betting industry in the U.S.

Caesars said it is interested in the the company’s U.S. assets, and indicated it would seek to sell off William Hill’s assets in the United Kingdom and other countries.

The private equity firm Apollo Global Management Inc. had also been interested in acquiring William Hill; it remains to be seen if the firm would be a potential purchaser for some of its European assets.

William Hill was founded in 1934 and grew to become a well-known name in the betting industry, particularly in England.

But its prospects darkened after 2018 when the British government sharply limited the amount that it and other bookmakers could charge on betting terminals, and William Hill turned its attention to the U.S., where legal sports betting was in its infancy following a Supreme Court ruling allowing individual states to legalize it in a case brought by New Jersey.

“The William Hill board believes this is the best option for William Hill at an attractive price for shareholders,” company chairman Roger Devlin said in a statement. “It recognizes the significant progress the William Hill Group has made over the last 18 months, as well as the risk and significant investment required to maximize the U.S. opportunity given intense competition in the U.S. and the potential for regulatory disruption in the U.K. and Europe.”

Even before the sale was announced, the two companies had been drawing closer, agreeing on a joint venture in which Caesars owns 20% of William Hill’s U.S. business in return for the right to offer sports betting at the more than 50 casinos Caesars runs in the U.S.

In Atlantic City, William Hill sports books operate at the Ocean Casino Resort, Tropicana, Bally’s and Harrah’s. It also runs the sports betting operation at the Monmouth Park racetrack in Oceanport near the Jersey shore.

New Jersey gamblers set a nationwide record for the most money bet on sports in a single month, plunking down almost $668 million in August on events including resurgent baseball, basketball and hockey seasons that had been interrupted by the coronavirus outbreak.

Console Wars: 6 Quick Things To Know About The Nintendo And Sega Feud Before The CBS All Access Documentary