If you’re a PC gamer planning to get the most out of Call of Duty: Black Ops Cold War, to paraphrase the legendary Chief Brody, you’re gonna need a bigger hard drive.

Activision has revealed the full list of recommended specs for the forthcoming first-person shooter and it isn’t pretty reading.

If you want to play the game in 4K with the Ultra RTX settings enabled, you’re going to need 250GB of spare hard drive space. That’s described as “specs to run the fame at a high FPS in 4K resolution with ray tracing.”

It’s not just the hard drive spare you’ll need either, you’ll also require the high-end Nvidia GeForce RTX 3080 GPU and 16GB of RAM. Activision is also recommending an Intel i9-9900K or AMD Ryzen 3700X CPU this mode (via The Verge). 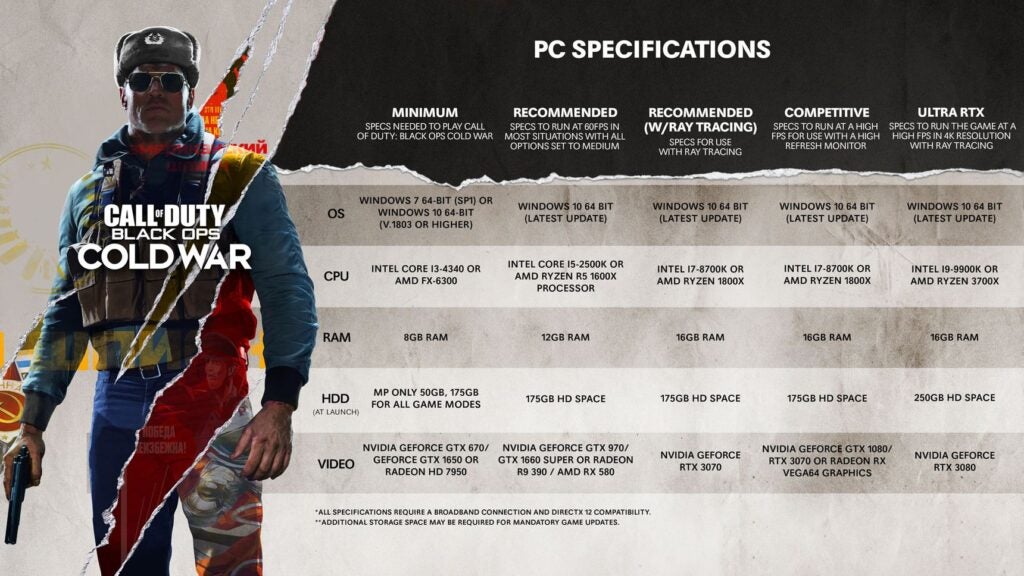 However, the news doesn’t get an awful lot better elsewhere in terms of hard-drive space. The Recommenced, Recommended w/ Ray Tracing and Competitive specs list calls for 175GB of free space.

If you only want to play the multiplayer, you can get away with 50 GB with the minimum spec, but again you’ll need 175GB if you want to play with all game modes enabled.

This news doesn’t bode well for the hard-drives of Xbox Series X and Sony PS5 users. Activision is yet to announce the space requirements for the next-gen consoles.

The game arrives on November 13 on PS4, Xbox One and PS4, as well as the next-gen Xbox Series S/X and PS5 consoles.  Let’s hope the Treyarch title is kinder to the console hard drives than it is to those of PC gamers.

Chris Smith is a freelance technology journalist for a host of UK tech publications, including Trusted Reviews. He’s based in South Florida, USA.
…