WATCH: These VR Boots Allow Gamers to Walk in Half-Life: Alyx and Other Video Games

A pair of VR boots was developed, which an American company claims to allow players to walk in video games’ virtual reality. Ekto VR developed the device called Ecto One, the new boots with two rotating plates, which can twist to the wearer’s direction.

(Photo : Screenshot from Twitter post of @ZyadShadi)
Gamers Can Now Walk in Video Games Using This New VR Boots, But Running Movement Is Not Supported

The game equipment also has wheels that pull the player’s legs backward as they move forward when their foot is on the ground. This feature allows users to stay in one place when they move.

Ekto VR demonstrated its new technology playing the game Half-Life: Alyx in the virtual reality version. The demonstrator can be seen walking up a stair and onto a balcony with relative ease in the video.

The man was also able to climb a ladder and reach a higher platform. However, the effect was done by approaching the ladder, and the game itself moved the player onto the roof.

The boots currently can’t allow users to mimic the movement of climbing. However, the device supports other actions such as crouching, where the player in the video can be seen holding the virtual reality handsets, reaching a lower door, and going through it. 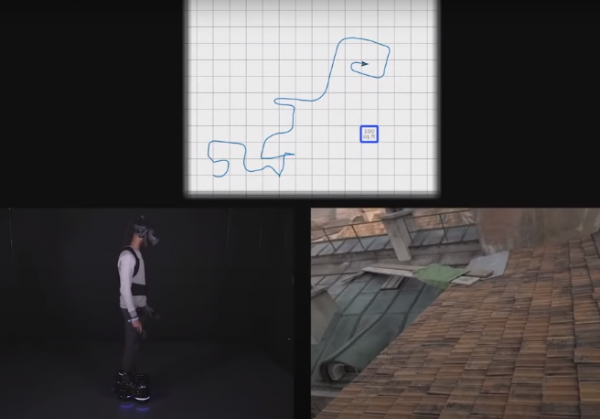 (Photo : Screenshot from YouTube)
Gamers Can Now Walk in Video Games Using This New VR Boots, But Running Movement Is Not Supported

However, the VR boots don’t support players’ running movement yet. VentureBeat’s previous report stated that the device could be ready for consumer applications in two to four years.

Some experts currently question the product’s use since many video games require players to escape dangerous scenarios and enemies’ attacks. It is still unclear how the VR boots would keep up with these kinds of situations.

On the other hand, there are also different virtual reality boots that could enter the market. One of these is a pair of motion controllers and shoes, revealed by a Japanese company Cerevo in 2017, which vibrates as the user kicks or walks.

VR sensors were also used to train football players by tracking their movements, allowing them to practice targeted shots on the goal.

Also Read: Genshin Impact’s Release Time on PS4, iOS, and PC; Check Out If It Is Really Comparable With The Legend of Zelda: Breath of the Wild

This article is owned by Tech Times

ⓒ 2018 TECHTIMES.com All rights reserved. Do not reproduce without permission.

Esports next big thing in state