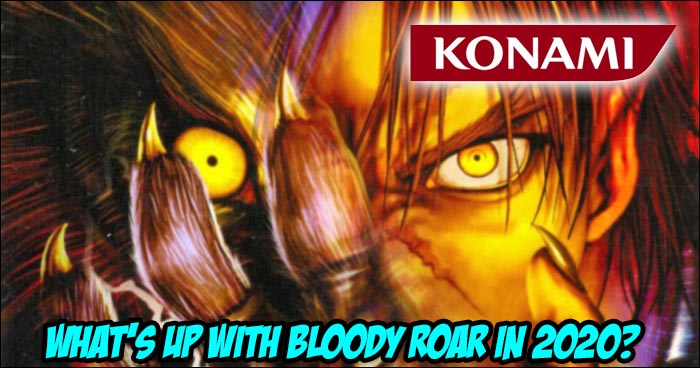 Bloody Roar as a fighting game franchise has laid dormant for over 16 years at this point, but some fans now have their ears perked up due to some recent developments in the series.


Konami has now registered a new trademark for Bloody Roar in the United States for the first time, but what does that mean for the prospects of seeing a new release at some point in the future?

As pointed out by Bloody Roar superfan Jerimiahisaiah, the filing, which was first submitted in March this year, does appear to be explicitly tied to video game software which means that it’s probably unrelated to something like a pachinko machine or any other forms of media. That’s off to a pretty good start.

This is also the first trademark Konami has applied for with Bloody Roar since they acquired the original rights holders, Hudson Soft, back in 2012.

On paper, that could point to a new project for the oft-forgotten fighter being in the works, but that certainly doesn’t mean that one actually exists for a multitude of reasons.

Firstly, Konami could have been on the cusp of losing rights to the Bloody Roar property with their license expiring, so they simply could have filed just to keep their ability to publish the IP — despite the company never doing anything with it since they obtained all of Hudson’s games.

We saw similar filings from Capcom late last year for a bunch of classic titles which have also yet to come back in any menaingful way between Darkstalkers, Cyberbots, Power Stone, Dino Crisis and others.

There’s also the problem that Konami largely exited the console gaming market over the past few years, and their only new release in 2020 appears to be just Super Bomberman R Online for Google Stadia.

The argument can easily be made as to why Konami would pick Bloody Roar back up for a new game when other, more widely recognizable franchises like Metal Gear, Silent Hill and Castlevania still remain dormant as well.

If anything, an HD remaster or collection seems like it’d be the most likely route the company would take at this current time if Konami had already been approached by an outside developer to take up the task.

Bloody Roar began its life as Beastorizer in 1997 where it would see multiple sequels across the PlayStation, Xbox, Gamecube and PS2 where it would remain outside of a re-release as a PS One Classics on PS3/PSP.

The gameplay offered some unique mechanics by controlling Zoanthropes, half-human and half-animal hybrids that can transform between the two states during battle.

With the PlayStation 5 and Xbox Series X right around the corner now, perhaps Konami is reconsidering their stance on console development, but they’ve shown no real outward signs of change right now.

Eighting, the developers of the series previously, are still very much around having just worked on Pikmin 3 Deluxe, but FGC members are probably most familiar with their work on Tatsunoko vs. Capcom and Marvel vs. Capcom 3.

It’s certainly not impossible for a new entry or collection to currently be in the works, but it’s also still way too early to get our hopes up at all considering Bloody Roar 4 came out all the way back in 2004.

Nintendo Switch is back in stock at Amazon

PS5 Sales to Exceed 200 to 300 Million Units in 5 to 6 Years, Analyst Says; Could Terminate the Long-Running Console War